The Enduring Legacy of City Fresh

Cleveland, 2018. Zipping down Woodland Avenue on Cleveland’s east-side, I approached a red light and swung into the lane adjacent to a box truck. Wanting to experience the full torque blast-off of my electric Chevy Bolt, I didn’t want to be slowed by a cumbersome delivery truck.

As I rolled to a stop, the truck’s colorful side panel scrolled past my window, grabbing my attention. I stopped and glanced up and immediately became giddy.

An exploding strawberry contained “City Fresh” with the motto “Eat Local Eat Fresh” on the side of the truck.

Normally, I wouldn’t give a second glance to a delivery truck. But in this case, I couldn’t stop looking. There was something momentous about seeing the City Fresh delivery truck out in the wild, proudly displaying its logo and mission on the streets of Cleveland. The truck turned onto the entry ramp for I-90, likely on its way to some west-side deliveries. As my light turned green, I inched forward, watching the truck disappear into traffic.

From there, I drove the pace of nostalgia – unhurried and no longer worried about full-torque take-offs or the fact that I was late meeting a friend.

Seeing the truck made me realize just how enduring City Fresh became as a social movement. As I drove, my memories brought me back to the early 2000’s when I and a gang of other ardent food justice locavores started the first City Fresh Stop in an abandoned parking lot near W. 25th and Clark.  At that point, we could not even conceive the possibility of a box truck supporting our makeshift operation. Instead, our distribution included whatever we could stuff into the bed of my tattered Chevy S-10 farm truck or Maurice Small’s well-used mini-van. Our hope was that each vehicle would work long enough for us to make the rounds of area farms and converge around the same time at the parking lot to set-up the Fresh Stop. 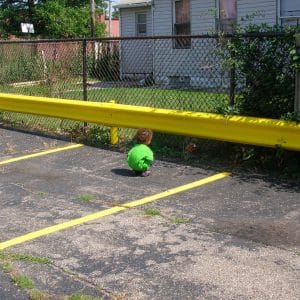 The ideas behind City Fresh began in my graduate studies at Cleveland State University. I wrote a Master’s Thesis exploring the economic potential to tap the $3.2 billion+ (in 1999 dollars) spending on food in Cuyahoga County to stimulate the regional farm economy. Not content to let my thesis disappear into the graveyard of forgotten manuscripts, I organized a “Regional Food Congress” to gather together stakeholders from around Northeast Ohio to put our heads together and figure out how to actually make this happen. My advisor, Professor Ned Hill, noted that it was likely the first time any Amish farmers had set foot in the Urban Affairs College.

From the Congress, three key concerns  became clear. First, the lack of healthy and affordable food access in Cleveland neighborhoods was contributing to a public health crisis. Second, the vast stores of vacant urban land in Cleveland presented an opportunity for urban market gardening, turning a public liability into a source of fresh food and community activity. Third, we needed to find ways to facilitate greater urban and rural collaboration, leveraging the concentrated spending power of urban areas to stimulate rural economic activity.

Of course, it is fairly effortless to tape vision statements scrawled out on newsprint to walls. How would we ever implement such an under-taking?

Over the next several months, a diverse core of partners gathered to hammer out the framework for City Fresh. The cross-pollination between members of Cleveland’s Department of Public Health, Ohio State University Extension, Heifer International, the Ohio Farmers’ Union, and my employer – the New Agrarian Center – led to a framework to translate lofty visions into smaller, actionable projects. City Fresh sought to meet the need for healthy food access with the desire for local farmers to expand their market reach in the city. The two mechanisms to accomplish this? First, establishing a modified community-supported agriculture share program that could meet the cash flow constraints of limited income residents while providing a ready market and stable pricing for farmers. Second, develop a training and support network for aspiring urban farmers and market gardeners to bring an entrepreneurial perspective to Cleveland’s already rich community gardening scene.

Turned into a proposal in 2003, City Fresh was fortunate to be one of 20 selected nation-wide projects (out of 400 applicants) to receive funding from the USDA’s Community Food Projects program.

For me, however,  the news of procuring funding moved rapidly from exaltation to terror.

As simple as these ideas seemed on paper with their elaborate spreadsheets and implementation tables, successfully enacting them proved an enormous challenge.

After a couple of months of extensive outreach in the Clark-Fulton neighborhood, we opened our first Fresh Stop in the summer of 2004. We had no shareholders at that point, so we loaded the tables with vegetables to entice people in. People did trickle in, but responded with a mix of confusion and irritation when we tried to sell them “shares of produce”.

“But I just want one tomato,” one would say.

Another would quip, “wait, let me get this straight. You want me to give you money this week and you say you’ll be here next week with my produce? Sounds like a scam to me.” 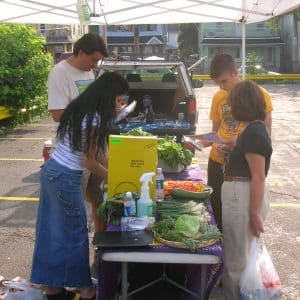 Early-on in the process, Lisa-Jean Sylvia, who would later go on to become City Fresh Director, showed up with her young son Xavier in a baby-stroller eager to volunteer. We laughed and said that what we really needed was someone to just buy a damn share. She became the first official share-holder and Xavier affectionately became named the “City Fresh baby”. 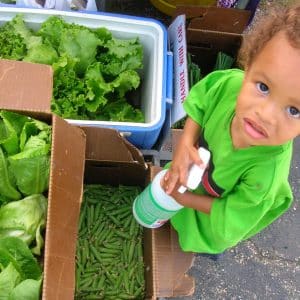 Lisa-Jean Sylvia became one of the first shareholders of City Fresh. Her son Xavier helps to mist the veggies. (Photo Credit Maurice Small)

The first few weeks of the Fresh Stop were choppy, but eventually we had a core of about 10 shareholders six weeks in – a small improvement but far shy of where we wanted to be.

Remarkably, by the end of the season, the parking lot had grown into a dynamic community gathering space. We had signed-up about 60 share holders. Friendships formed. People helped to get the word out and bring their neighbors. Far removed from our meager beginnings,  the last Fresh Stop  of the season included an open music jam, a community pot-luck featuring City Fresh veggies, cooking demonstrations, and nutrition education. One shareholder, an elderly eastern-European woman actually cried that the Fresh Stop would be gone after that week. She said that the Fresh Stop reminded her of the 1950’s when farmers would sell produce right off of the back of their trucks in Cleveland neighborhoods.

The Clark-Fulton Fresh Stop by the end of the season became a community gathering space with socializing, music, food samples, and fun! (Photo Credits Maurice Small)

Watching the Clark-Fulton Fresh Stop grow out of the cracked asphalt of a desolate parking lot into a joyful community gathering space gave us a sense of how City Fresh could grow. The next year, we intended to open just one more Fresh Stop at the Urban Community School. But the word had already spread to other neighborhoods and Lakewood and Slavic Village quickly jumped on board. We used the Clark-Fulton Fresh Stop as a training site for the other neighborhoods.  After helping and learning the ropes there, they replicated their own Fresh Stops, adding their own unique local touches.

By year three, we had 17 neighborhoods become hosts for Fresh Stops. We exceeded our grant outcome by 15 neighborhoods and a 600 strong share base gave us the economy of scale to create a viable operation. What’s more, we established a mix of low and higher wealth neighborhoods. Those able to pay full share price helped to lower the costs for limited-income residents in their own or other neighborhoods.

What propelled this level of growth? The same dynamics that hold City Fresh together to this day: community trust, social equity, ecological sustainability, collaborative neighborhood networks, volunteer grit, on-going learning, and an urban-rural distribution that builds small bridges across the political gulf that divides our region today.

As I pulled up to my destination – the Bookhouse Brewery – I couldn’t wait to tell my friend about how I saw the coolest box truck ever on the way over. And then I bent his ear, probably for way too long, about the enduring legacy of City Fresh!

To delve into more City Fresh history, check out this excerpt from PolyCultures – Food Where We Live, a featured selection of the 2009 Cleveland International Film Festival: