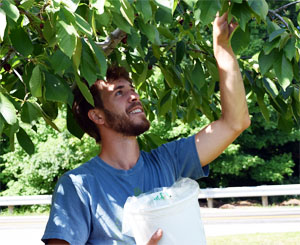 Another busy week is coming to a close. The weather has been beautiful, and the cicadas have been shedding their skin in the forests by the thousands. Throughout the week, we kept working on the same tasks as the week prior—trellising, watering and de-suckering the tomato plants, and weeding the onion patch. Claudia discovered a raised bed with self-sowed garlic, so we also weeded that patch as well. Cassandra, Justin, and Claudia started mulching the section of the onion patch, which has been weeded, which will likely continue into next week.

Claudia and Brad cleaned out the duck pen and attempted to patch several holes in the fence through which the ducks were escaping. Denny is currently setting up an electric fence around the duck pen as an extra safety measure to ensure the ducks do not escape. For those of you who saw the baby ducklings in the spring a few days after they hatched, they are now growing into their teenage years! Much fun ahead.

We spent less time farming this week because we had several other large tasks, which needed to be done. Denny rented a backhoe to turn the compost pile over before it became anaerobic, to move the leaf mulch for the onions into the field, to move some usable compost to a more accessible location, to dig a pit for the beehives, and most importantly to begin working on an intake housing for the solar irrigation pump.

Sadly, the reason the bees were acting so lethargic is because they contracted a deadly bacteria which lives in their hives and honey for up to 70 years. It spreads when other bees steal honey from the weakened, infected hives, and so we were forced to kill the bees to prevent the bacteria spreading to other hives. Abbey and Claudia put the hives into a hole, covered it in gasoline, and buried it this Friday morning. The only good news about the situation is that Abbey is getting another beehive to replace these, so she should still be able to host apiculture-related workshops throughout the summer.

For me, the highlight of this week was going cherry picking at Miller Orchards for City Fresh. We went on Thursday morning and picked roughly 140 pounds of cherries in a few hours. I never realized how many cherries each tree produces until yesterday, when I spent the full 3 hours picking roughly 40 pounds of cherries from a single tree and still did not even come close to picking all the cherries from the tree. And there must have been close a hundred trees in the orchard (don’t quote me on this number!), so suffice to say I was impressed. Plus, cherries are my favorite fruit and quite a few cherries missed the bucket and landed in my mouth.

That concludes most of the things we did at the George Jones farm this week! Next week I will see how the Oberlin Farmer’s Market went, and I also hope to create a short bio of everyone working at the farm this summer.

This was my first week working at the George Jones Memorial Farm, and everything has been really great so far. Over the course of this summer I will try to provide weekly updates on the work being done on the farm, the future plans for the summer, and any other relevant happenings at the farm.